"Over time, I have had many posts on the scientific method here ...

You posit a falsifiable hypothesis.

Then you collect and examine the evidence.

If the evidence contradicts your hypothesis you must abandon it and move on.

Then there is woke “science,” most visible these days in the arenas of response to the Covid-19 virus and of climate change.

Here the principles are a little different.

In woke “science” there is no falsifiable hypothesis.

In place of that, we have the official orthodox consensus view.

The official orthodox consensus view has been arrived at by all the smartest people, because it just seems like it must be right.

The official orthodox consensus view must not be contradicted, particularly by the little people like you.

on the official orthodox consensus view, those in power can take away all your freedom (COVID) and/or transform the entire economy (climate).

After all, it’s the “science.”

But what if evidence seems to contradict the official orthodox consensus view?

... official orthodox consensus view must not be contradicted.

Today’s news brings a couple of extreme examples of that, one on the virus front, and the other relating to climate.

Both of these are from Europe, so you may not have seen them.

... to the subject of climate change.

As you may have read, last week brought record-breaking cold to much of Europe which, given that we are well into April, caused substantial damage to crops in their early stages of Spring growth.

Actually, it’s likely that you didn’t read about that at all.

That’s because the U.S. mainstream media mostly only report on record warmth, not record cold.

As an example, I can’t find any mention of the subject of Europe’s cold snap in the New York Times (although I do find an article in the Washington Post).

But, particularly given the extensive crop damage, let alone the readership personally experiencing the bitter cold temperatures, the European press can’t avoid reporting on the subject.

Doesn’t this extreme cold kind of undermine the official orthodox consensus view that the climate is rapidly getting warmer?

Here is the story from France’s Le Figaro, April 9 (my translation):

A bout of severe frost struck numerous crops this week in France.

Temperatures plummeted, in some places, below 0 degrees C (32 F) at a speed never seen since 1947 for the month of April.

Quick, somebody needs to explain how that is consistent with “global warming.”

Le Figaro calls in one Thierry Castel, identified as a “climatology researcher.”

This is well linked [to global warming].

That brings us back down to about the same temperature we had back in 1988.

Needless to say, Le Figaro was way too polite to confront M. Castel with this information.

Here is the latest UAH chart of global temperatures, going back to 1979: 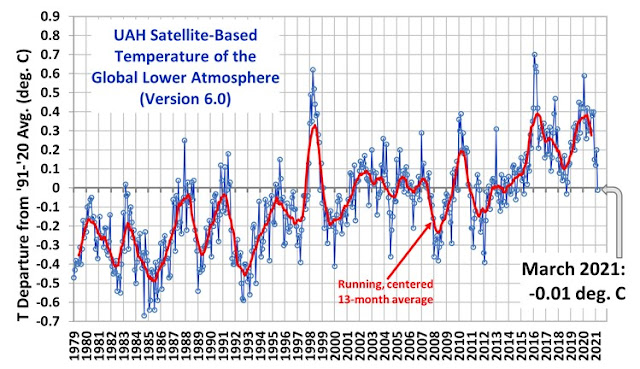 On the virus front, we consider the case of Germany.

For some reason, Germany has been relatively lightly hit by the virus, at least so far.

According to the latest from Worldometers, Germany has had 940 deaths per million population to date.

But starting in about mid-March, Germany has seen a renewed “surge” of cases.

... on March 23 German Chancellor Angela Merkel announced a new three-week “lockdown” of the strictest variety, which included the forced closing of most stores from April 1 - 5. ...

The German government is looking to impose even stricter lockdown measures.

Liberty has been suspended indefinitely in Europe.

The problem here is that if the proposition that lockdowns work were a falsifiable hypothesis, it would have been falsified by now.

Try to find any actual data for the efficacy of lock downs, and you can’t.

That is, except for their efficacy in generating an unemployment rate of 13% in New York City versus 4.8% in Florida.

But Germany, like the blue U.S. states, operates by the alternative principles of woke “science.” "

Posted by The Cliff Claven of Finance at 6:37 AM