"Offshore Wind Is Off the Charts Political Nonsense"

Biden intends to spend around $3 trillion that will supposedly focus heavily on infrastructure to reduce greenhouse-gas emissions, which Biden believes will produce American jobs.

But the jobs in offshore wind are mostly temporary construction jobs and the current offshore wind projects all involve European companies.

A truly free market would be constructing less expensive onshore technology, including American natural gas, coal, and nuclear power, and not prematurely retiring fossil fuel and nuclear plants, which Biden’s projects will do.

The Biden administration has announced plans to vastly expand the use of offshore wind power along the U.S. East Coast.

The plan sets a goal of deploying 30,000 megawatts of offshore wind turbines in coastal waters nationwide by 2030.

President Biden will accelerate permitting of wind projects off the Atlantic Coast (perhaps by shortening required scientific studies) and open up waters near New York and New Jersey for wind development.

The administration also plans to offer $3 billion in federal loan guarantees for offshore wind projects and invest in upgrading the nation’s ports to support wind construction.

... Some officials claim that offshore wind deployment would create 44,000 new jobs directly in the offshore wind sector through building and installing turbines, and 33,000 new indirect jobs.

The efforts to build wind farms from North Carolina’s Outer Banks to Cape Cod off of Massachusetts are nearly a decade in the planning stage, with 17 current projects in development along the coast.

Only seven wind turbines are currently in U.S. waters (a small array near Block Island, R.I. and a turbine off the coast of Virginia), but over 1,500 are in the planning or development stages.

... states in the Northeast and mid-Atlantic regions — including Connecticut, Maryland, Massachusetts, New Jersey, New York, and Virginia — have committed to over 25,000 megawatts of offshore wind power capacity by 2035.

New York and New Jersey have committed to procuring a combined 16,500 megawatts of new offshore wind power by 2035.

The Biden administration designated an area of shallow water between Long Island and the New Jersey coast as a priority offshore wind area.

Auctions will be held for developers to bid on the right to apply for federal permits to construct wind projects in that area.

The Bureau of Ocean Energy Management will publish a proposed sale notice and, after a formal comment period, will plan on lease sales in late 2021 or early 2022.

The ocean management bureau is also planning an environmental review of a 1,100 megawatt offshore wind farm proposed to be developed about 15 miles off the coast of Atlantic City, N.J., which has a goal of developing 7,500 megawatts of offshore wind energy by 2035.

... The Transportation Department ... announced $230 million funding for port authorities for the construction of storage areas and other projects to support wind development.

The biggest pot of money, $3 billion, is being made available through the Department of Energy’s loan program to partner with offshore wind and transmission developers.

In March, the Biden administration approved an environmental review for a large-scale offshore wind farm, off the coast of Martha’s Vineyard in Massachusetts.

That wind farm consisting of 84 large wind turbines with 800 megawatts of electric generating capacity is slated to come online by 2023.

Vineyard Wind is one of 13 offshore wind projects along the East Coast that is under federal review.

The Interior Department estimated that as many as 2,000 turbines could be positioned in the Atlantic Ocean by 2030.

Commercial fishermen are opposed to the offshore wind farms.

Federal waters in the Atlantic are home to a variety of economically important fisheries, including sea scallops, squid and surf clams, many of which overlap with areas of expected offshore wind development.

Fishing groups have repeatedly raised concerns that their boats and trawlers will be forced to stay away from the wind turbines, the largest of which have rotor diameters the length of over 2 football fields.

That could limit the amount of seafood they can ultimately catch, potentially depriving coastal fishing communities of millions of dollars in revenue as well as their fishing culture.

Wind turbines in the ocean are much bigger than the on-land versions that dominate the landscape in places like the American Midwest. 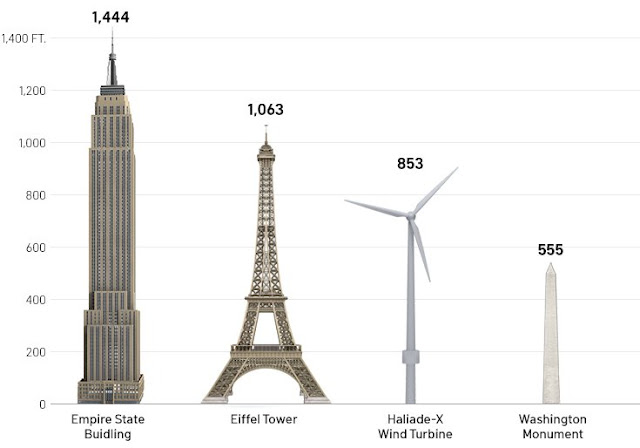 The Haliade-X is manufactured in France.

U.S. fisheries are more strictly regulated than anywhere else in the world and cannot just change their gear and go fish elsewhere.

As part of the Vineyard Wind project, Massachusetts agreed to set aside $21 million to compensate fishermen for losses, though it remains unclear how that money will be spent.

... Marine scientists also indicated that there were many unanswered questions about how offshore wind construction might affect ocean ecosystems in the Atlantic Ocean that are already under stress.

Another area not yet studied is the impact of offshore wind farms on the power grid.

... At a conference of offshore wind industry leaders and experts in energy infrastructure hosted by the New Jersey Board of Utilities in late February, one utility executive indicated the power grid is “used to a west-east flow of energy” and “as we move into this new era, we’re going to encounter a very different set of problems.”

Although it is likely problems can be overcome, the solutions may prove extensive and expensive for the consumers and taxpayers paying for it.

Jones Act vessels are required to bring in monstrous wind turbines to be erected at offshore sites if they are arriving from U.S. ports.

The Jones Act is a 100-year-old federal law requiring all ships that deliver goods domestically to be built in the United States.

The offshore wind industry needs massive vessels that specialize in the installation of wind turbines, which must be built in the United States very quickly.

According to Biden, Virginia-based Dominion Energy is in the process of building a Jones Act vessel in Texas.

Even without the specialized installation vessel, the first wind farms that gain federal approval would probably use existing U.S.-flagged vessels that are not specifically designed to install turbines.

Offshore wind is an expensive undertaking, not just because of the new ships required and the expected problems with the power grid,

but because the technology is more expensive than competing technologies, so that a free market would not buy into offshore wind. 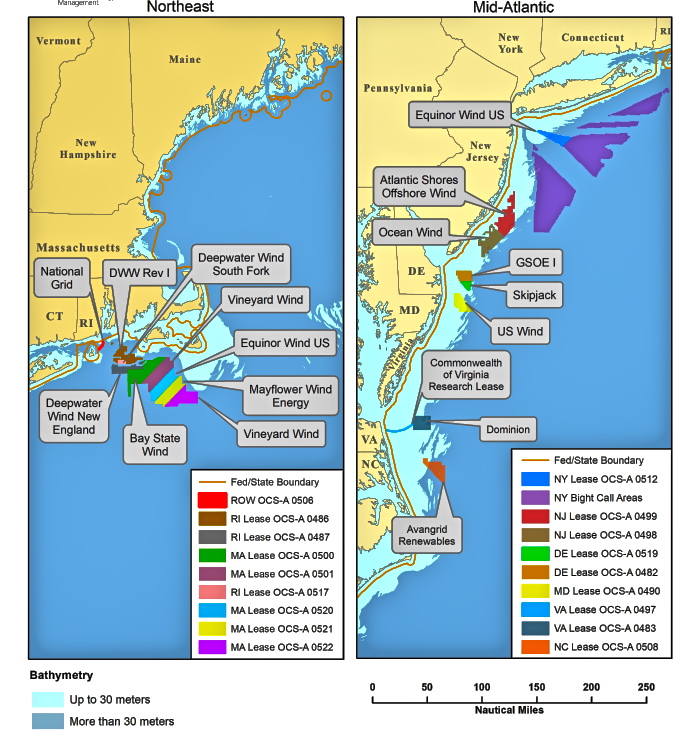 Posted by The Cliff Claven of Finance at 7:44 AM