The articles are consistently good and the quantity of good articles so far in March 2022 is hard to believe, coming from one author. I rarely recommend other websites because they lack consistency. This one is a rare exception.

Concerning the UAH global average temperature compilation: This blog has always favored UAH data, and warned readers that global averages were not trustworthy before the use of weather satellites in 1979.

Actually, 1940 to 1975 was originally measured as a significant global cooling period. But that fact was "inconvenient" for the 'CO2 causes dangerous global warming' narrative, so climate reality was gradually "adjusted away" (aka  Science fraud by government bureaucrats with science degrees).
Ye Editor

The data used is all collected the same way and with similar instruments.

The temperature measured is mostly above the chaotic boundary layer of the atmosphere and is more stable.

Radiosonde data is available as an independent check on the calculations.

... the UAH temperature calculations correlate best with the radiosonde data, suggesting that it is the best satellite temperature record.

The RSS decision to include the clearly flawed NOAA-14 data in their calculations is highly questionable when the clearly superior NOAA-15 data is available for the period in question.

NOAA-15 develops problems later and both RSS and UAH drop it early, but NOAA-STAR continues to use it for many more years.

Since the UAH temperature record is probably the superior record, it is reasonable to estimate TCR (transient climate sensitivity to a CO2 level doubling. Ye Editor) from it.

Christy and McNider did this and derived a TCR of 1.1°C/2xCO2.

It seems very likely to me that AR6 is deliberately ignoring valid analysis and data to sell their political agenda.

DETAILS (highly edited)
" ... Comparisons of the satellite datasets are difficult, because while they share the same data, they use very different procedures to produce their respective temperature records.

In particular, the UAH procedure is quite different from the other three.

While the traditional NOAA dataset is called “STAR,” they now have a new one, called RMTMT for the middle troposphere that we will discuss near the end of the post.

... Nearly all radiosonde records are over land, so comparisons to weather reanalysis datasets were also made since warming rates are different over land and ocean.

... In every comparison, both globally and for the tropics, the UAH satellite temperature record correlated to the radiosondes best.

In addition, the UAH global temperature trend is lower than the trends of the other datasets from 1979 to 2015 globally and for the tropics.

The radiosonde data is not perfect, it has erroneous data as well, but it is independent of the satellite records and provides a neutral, unbiased check on the various methods of processing the satellite data.

There is no such check for the various surface temperature datasets, they all share the same data and mostly use the same methods to process it. 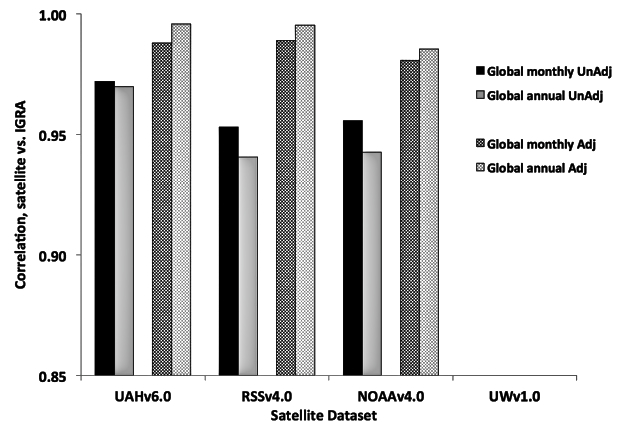 As Christy, et al. explain, while the UAH dataset correlates better than the other two satellite datasets, the difference in correlation approaches statistical significance, but does not reach that level.

Figure 2 compares the temperature trends from the IGRA radiosondes to the global satellite datasets.

The adjusted radiosonde data is shown in red, and the full global grid trend is shown in pink.

Figure 2. A comparison of warming trends from 1979 to 2015 for the radiosonde data and the three global satellites. Source CSBJ18. 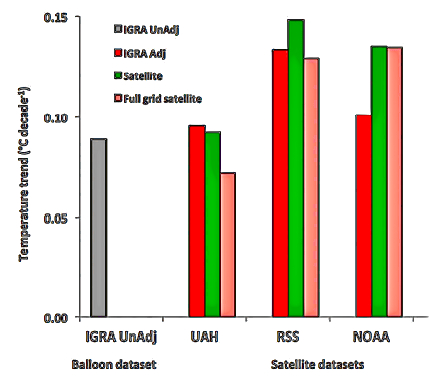 The UAH dataset matches the radiosonde warming trend better than the RSS and NOAA datasets.

The RSS and NOAA datasets show much more warming.
The references can be downloaded here"
https://andymaypetrophysicist.com/wp-content/uploads/2022/03/UAH_RSS_Works-Cited.pdf
Posted by The Cliff Claven of Finance at 2:03 PM
Email ThisBlogThis!Share to TwitterShare to FacebookShare to Pinterest
Newer Post Older Post Home