The Securities and Exchange Commission's (SEC) climate change risk reporting proposal is not grounded in science, by Andy May

"This is the full uncut version of the op-ed Mr. May wrote for the Washington Examiner, here:  https://www.washingtonexaminer.com/opinion/op-eds/the-secs-climate-proposal-is-not-grounded-in-sound-science

"CONCLUSION:
The SEC document claims that: “the impact of climate-related risks on both individual businesses and the financial system as a whole are well documented.” This does not seem to be the case.

Recent research by Professor Roger Pielke Jr., Dr. Bjorn Lomborg, and data from the EM-DAT disaster database all show the impact of climate change, whether of natural or human origin, is declining.

The costs in the NOAA “Summary Stats” document are adjusted for the consumer price index, but they are not adjusted for population or GDP, and these are critical factors.

The document they cite about the 4th warmest year on record, critically does not document why warming since the 20th century is a bad thing.

Particularly, when considering the horrible suffering of people in the Northern Hemisphere during the Little Ice Age, due to cold and drought, one should not assume that a warmer climate is worse than a colder one.

It was far from an ideal climate and during its colder periods, glaciers advanced in the Alps and destroyed entire towns. It was a time of perpetual war, famines, and plagues. ...

Over 50,000 witches were burned alive. Tens of thousands of Jews were massacred. Not because there was any proof, just because someone had to suffer for the bad climate.

... Clear proof is needed first that human actions are significantly contributing to climate change. Such proof does not exist, the claim comes from computer models that have now been falsified.

It seems the SEC is accepting the politically correct dogma that warmer is bad, without demanding evidence that it is. This is no way to make policy.

DETAILS:
On March 22, 2022, the Securities and Exchange Commission (SEC) released a new rule for public comment (File Number S7-10-22) that would require public companies to report the climate-related impact of their businesses.

Since it has been well established in multiple IPCC reports that the human impact on climate has never been observed, only modeled, this seems unnecessary. The climate models, used by the IPCC and NOAA to “compute” the human impact on climate have already been invalidated by Dr. Ross McKitrick and Dr. John Christy in their well-known Earth and Space Science peer-reviewed paper.

... While “climate-related” risks do exist, as they always have, it is well documented that they are decreasing with time, both in terms of frequency, financial impact, and severity. ...

... reliable reporting of disasters did not start until 2000, according to Regina Below and Prof. D.Guha-Sapir of EM-DAT. The decrease is logical since summers and days are warming at a lower rate than winters and nights. The tropics are hardly warming at all while the North Polar region[1] is warming quite a lot. Thus, the climate is becoming milder as it warms, with fewer extremes and therefore, fewer severe storms.

Climate is usually defined as a change in average weather over a period of 30 years or more. The footnote above specifies “climate-related disasters” that have $1 billion in damages in 2020 and notes they surpass previous highs from nine years before and three years before. The value of one billion dollars is corrected for the consumer price index (CPI) but not corrected for population or GDP.

All the cited years are within one climate period of 30 years; thus they are considering weather events, not climate. It is well established that weather damages, as a percentage of GDP, are declining over climate periods of time. " 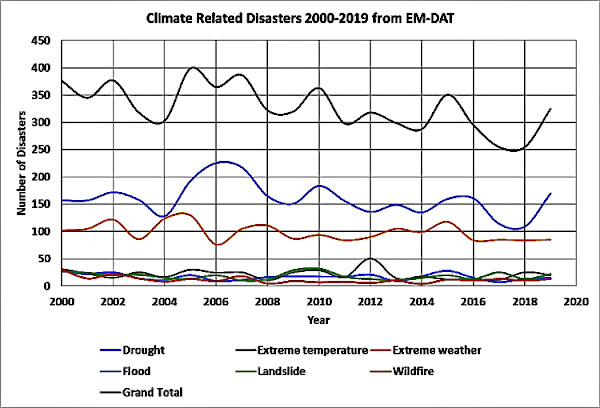 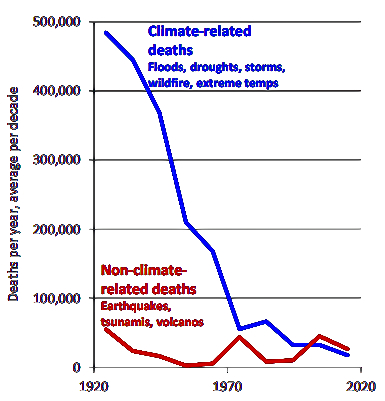