Here's the story about the
the 1940's to 1970's that
has been "erased" from
the climate history books,
by smarmy NASA-GISS,
world leaders in science fraud:

Until the mid-1980s,
it was widely accepted
in the peer-reviewed
scientific literature
that there was global
cooling between the
1940s and 1970s. 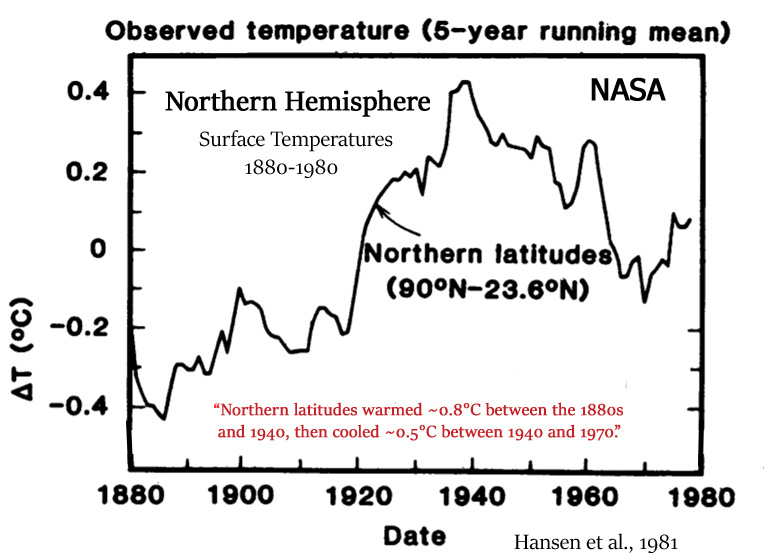 The NAS also concluded that
a “serious worldwide cooling”
has a “finite probability”
to befall the Earth within
the next century, or by about 2075.

NOAA (1974) also agreed that
Northern Hemisphere temperatures
declined by about -0.5°C after 1940,
but additionally pointed out that
a new ice age may be approaching,
with scientists linking the 1970s-era
droughts and crop failures
and ice expansion to the
ongoing global cooling.

NOAA, 1974
“Many climatologists have associated
this drought and other recent weather
anomalies with a global cooling trend
and changes in atmospheric circulation
which, if prolonged, pose serious threats
to major food-producing regions of the world.

… Annual average temperatures
over the Northern Hemisphere
increased rather dramatically
from about 1890 through 1940,
but have been falling ever since.
The total change has averaged
about one-half degree Centigrade,
with the greatest cooling
in higher latitudes.”

A decades-long cooling trend
during the modern era is not
convenient for those
who advocate for the position
that humans control
the temperatures of the
oceans and atmosphere
by emitting more, or less, CO2.

So, instead of allowing
the original temperature
data showing +0.8°C
warming and -0.5°C cooling
(Northern Hemisphere)
to remain, temperature data
government bureaucrats
decided to gradually remove
several tenths of a degree
from the warming
and cooling amplitudes. 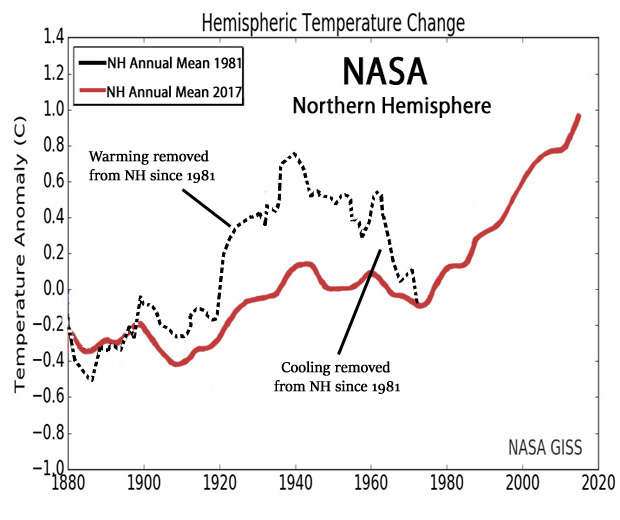 About half a degree
of temperature change
was removed from both trends. 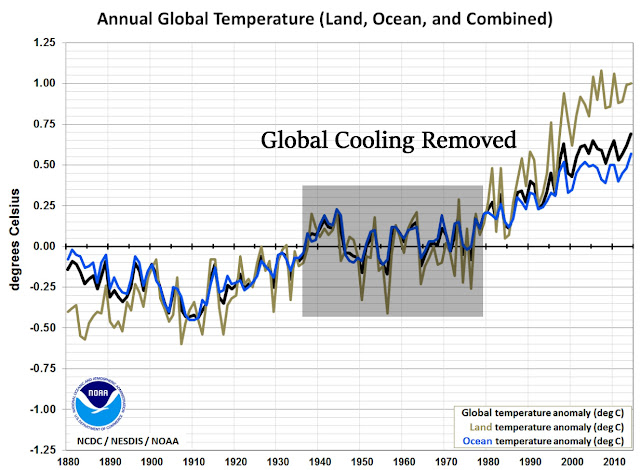 The global cooling has been removed
from climate history, although I will
never stop reporting a cooling trend
from 1940 to 1975, based on extensive
peer reviewed scientific literature
at the time.

Over 300 scientific publications
documented concerns pertaining
to the 1960s and 1970s
global cooling, sometimes
leading to an Ice Age scare.

Here are 51 of them:
Note: some links only show the abstracts

2. NOAA, 1974
“Annual average temperatures over the Northern Hemisphere increased rather dramatically from about 1890 through 1940, but have been falling ever since. The total change has averaged about one-half degree Centigrade, with the greatest cooling in higher latitudes".

5. Ellsaesser, 1975
https://link.springer.com/chapter/10.1007/978-94-010-1729-9_16#page-1
“In recent years there have appeared a rash of papers claiming an upward trend in airborne particulates, which is presumed to have already reversed the alleged CO2 induced heating of the atmosphere observed between the 1880’s and 1940’s and to pose the further threat of inducing another ice age. "

8. National Academy of Sciences, 1975
https://archive.org/stream/understandingcli00unit/understandingcli00unit_djvu.txt
“Starr and Oort (1973) have reported that, during the period 1958-1963, the hemisphere’s (mass-weighted) mean temperature decreased by about 0.6 °C. …   Since the 1940’s, mean temperatures have declined and are now nearly halfway back to the 1880 levels."

10. Gribbin, 1975
www.readcube.com/articles/10.1038/254014a0
“A recent flurry of papers has provided further evidence for the belief that the Earth is cooling. There now seems to be little doubt that changes over the past few years are more than a minor statistical fluctuation. … The observed cooling corresponds to a re-establishment of the ‘Little Ice Age’ which persisted for several hundred years up to the end of the nineteenth century”

13. Stewart and Glantz, 1985
https://www.albany.edu/cpr/stewart/Papers/J1290-StewartGlantzNDU1985cap.pdf
“One could effectively argue that in the early 1970s the prevailing view was that the earth was moving toward a new ice age. Many articles appeared in the scientific literature as well as in the popular press speculating about the impact on agriculture of a 1-2°C cooling.”

14. Denton and Karlén, 1977
https://www.sciencedirect.com/science/article/pii/003358947790014X
“Much of the 20th century has experienced glacier recession, but probably it would be premature to declare the Little Ice Age over.”

17. U.S. Central Intelligence Agency, 1974
http://www.climatemonitor.it/wp-content/uploads/2009/12/1974.pdf
“The western world’s leading climatologists have confirmed recent reports of a detrimental global climate change.  The stability of most nations is based upon a dependable source of food, but this stability will not be possible under the new climatic era. A forecast by the University of Wisconsin projects that the earth’s climate is returning to that of the neo-boreal era (1600-1850) – an era of drought, famine, and political unrest in the western world [the Little Ice Age].”

"Since the late 1960s, a number of foreboding climatic predictions has appeared in various climatic, meteorological, and geological periodicals … Early in the 1970s, a series of adverse climatic anomalies occurred:  • The world’s snow and ice cover had increased by at least 10 to 15 percent.  •  In the eastern Canadian area of the Arctic Greenland, below normal temperatures were recorded for 19 consecutive months. Nothing like this had happened in the last 100 years. ”

18. Robock, 1978
http://climate.envsci.rutgers.edu/pdf/RobockInternalExternalJAS1978.pdf
“They show that the Northern Hemisphere annual mean temperature has risen about 1°C from 1880 to about 1940 and has fallen about 0.5 °C since then.”

19. Skeeter, 1985
https://muse.jhu.edu/article/429517/summary
“In 1970, Mitchell stated that by the late 1960s global temperatures had fallen 0.3°C from the peak in the 1940s, approximately one-half of the prior rise.  Similarly, Budyko reported that temperatures in the Northern Hemisphere fell 0.3-0.4°C between 1940 and 1976.  Summaries by Schneider and Dickenson, Kalnicky, Robuck, Roberts, and Agee all report Northern Hemisphere temperatures declines by at least 0.5°C since the 1940s.”

20. Hoffert and Flannery, 1985
https://www.osti.gov/servlets/purl/5885458
“In the last century it is possible to document an increase of about 0.6°C in the mean global temperature between 1880 and 1940 and a subsequent fall of temperature by about 0.3°C since 1940. In the polar regions north of 70° latitude the decrease in temperature in the past decade alone has been about 1°C, several times larger than the global average decrease"

21. Bradley and Miller, 1972
https://www.nature.com/articles/237385a0
“The climatic warming trend since the 1880s, which seems to have been global in extent and was manifested by an upward trend in mean annual (and particularly mean winter) temperatures, seems to have given way since the 1940s to a cooling trend, which is most marked in higher latitudes.”

23. Ghil, 1975
https://www.researchgate.net/profile/Michael_Ghil/publication/23926700_Climate_Stability_for_a_Sellers-Type_Model/links/00b4953b3dce808497000000/Climate-Stability-for-a-Sellers-Type-Model.pdf
“There has also been a concern about a possible climatic catastrophe [global cooling] being imminent because of the increase in the quantity of industrial pollutants in the atmosphere (Rasool and Schneider, 1971).”

27. Schneider, 1978
http://calteches.library.caltech.edu/3194/1/consequences.pdf
“In the short term (left) the temperature has risen by about 1/2 degree Celsius since the 1880s, and from the middle 1940s to the middle 1960s it dropped about 1/4 degree. What’s wrong with this picture is that there should be large error bars on it, because there are still vast regions of oceans not covered by thermometers.”

31. McCormick and Ludwig, 1967
https://science.sciencemag.org/content/156/3780/1358
“Theoretical considerations and empirical evidence indicate that atmospheric turbidity, a function of aerosol loading, is an important factor in the heat balance of the earth-atmosphere system. Turbidity increase over the past few decades may be primarily responsible for the decrease in worldwide air temperatures since the 1940’s“

32. Shultz and Hillerud, 1978
https://digitalcommons.unl.edu/cgi/viewcontent.cgi?referer=&httpsredir=1&article=1334&context=tnas
“Kukla and associates (1977) presented “new data on climatic trends” and showed that during the last 30 years in the Northern Hemisphere, the oscillatory cooling has not yet reversed."

33. Reitan, 1974
https://www.sciencedirect.com/science/article/pii/0033589474900611
“Mean monthly temperatures for the Northern Hemisphere were determined for the years 1955 through 1968 following the same procedures used by H. C. Willett and J. M. Mitchell, Jr., in their studies of long-term trends. It was found that the downward trend they reported starting in the 1940s continued, though interrupted, into the 1960s.”

34. Schneider and Dickinson, 1974
“Milder climate has returned in modern times, but the optimum (warmest) condition occurred in the 1940’s, and since then, there has been a fairly rapid cooling in the high latitudes of the northern hemisphere."

38. Lamb, 1966
https://www.jstor.org/stable/1792334?seq=1#page_scan_tab_contents
“ On this evidence, something like the climatic regime of the years since 1960 [global cooling] should probably be expected to persist till the end of the century or beyond“

43. Miles, 1978
https://www.nature.com/articles/276356a0
“The cooling of the Northern Hemisphere since 1940 has been variously interpreted as the overture to the next Ice Age, the effect of industrial pollution in the atmosphere or of a decline in the solar output."

44. Verma et al., 1984
https://www.tropmet.res.in/~lip/Publication/RR-pdf/RR-41.pdf
“Thus, during the last 3 decades, larger winter cooling anomalies, supported by observations and model studies, have greatly influenced the climate pattern – made it cooler and unstable.”

46. Holdren and Ehrlich, 1971
http://www.zombietime.com/zomblog/?p=873
Global Ecology: Readings toward a rational strategy for man [pgs. 76,77] … “It seems, however, that a competing effect has dominated the situation since 1940. This is the reduced transparency of the atmosphere to incoming light as a result of urban air pollution (smoke, aerosols), agricultural air pollution (dust), and volcanic ash. This screening phenomenon is said to be responsible for the present world cooling trend—a total of about .2°C in the world mean surface temperature over the past quarter century. This number seems small until it is realized that a decrease of only 4°C would probably be sufficient to start another ice age."

50.  Mitchell, 1970
https://link.springer.com/chapter/10.1007/978-94-010-3290-2_15
“Although changes of total atmospheric dust loading may possibly be sufficient to account for the observed 0.3°C-cooling of the earth since 1940, the human-derived contribution to these loading changes is inferred to have played a very minor role in the temperature decline.”