" ...  frozen wind turbines are not mainly to blame for the massive power outages in Texas.

But renewable energy subsidies are.

... with more than 30% of Texas customers reported to be without power on Tuesday,
a deeper investigation into the cause of the blackouts is warranted.

... Wind generation was the second largest source of power to the Texas grid last year, providing almost 23% of the state’s needs.

Yet, according to news reports, close to half of Texas’ wind turbines were out of service Monday night because they were frozen.

And the rest of them were operating at far less than capacity.

Just as it does at the summer peak, wind failed to show when it was most needed.

About half of Texans rely on electric pumps for heating, which liberals want to mandate everywhere.

But the pumps use a lot of power in frigid weather.

... while wind turbines were freezing, demand for power was surging.

Generation topped 50% of installed capacity, and produced close to or above 40% of the total ERCOT load for much of the day: 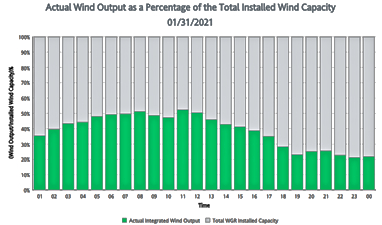 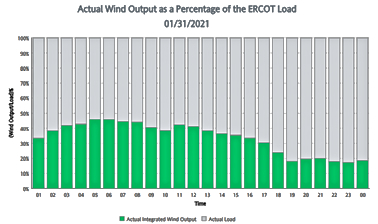 Just a week before the outages of Monday night, wind output was strong throughout the day .. in terms of its capacity factor (64%) and percentage of the ERCOT load (58%): 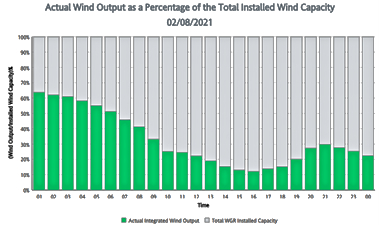 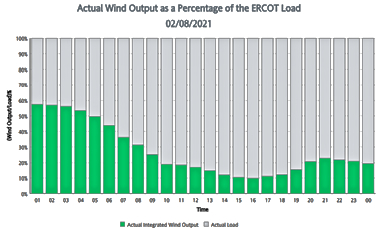 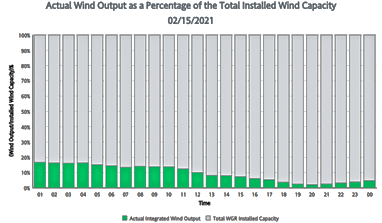 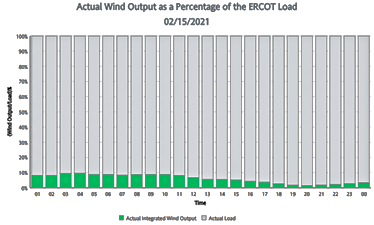 ... During the critical four-hour period from 10 p.m. to 2 a.m. when ERCOT was forced to begin rolling blackouts, actual wind output averaged less than 5% of the ERCOT load. 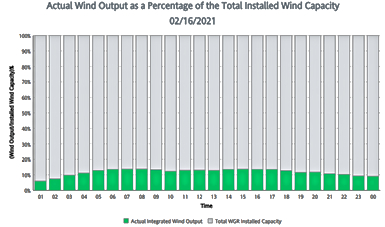 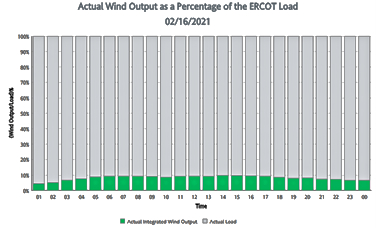 This was down from about 58% the week before.

It would be hard to overstate the damage caused by wind’s unreliability Monday night—or the harm its intermitency causes on a regular basis.

... Where was solar (on) Monday night?
Where solar is every night—off the grid, for the simple reason that the sun was not shining. 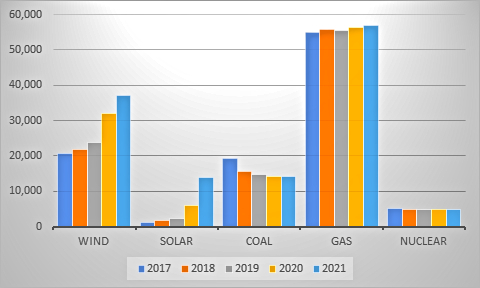 ... Gas-fired generation is up only 3.5% during this period.

In 2020, only two small combined-cycle gas units with a total capacity of 88 MW came online.

This begs the question, why would investors build new intermittent sources of generation in Texas like wind and solar that do not show up when needed?

... From 2006 to 2019, wind and solar generators in Texas received about $19.4 billion in subsidies and benefits from taxpayers and consumers.

It is estimated generators will receive another $15.9 billion over the next decade.

In 2018, about 28% of renewable generators’ income comes from subsidies.

... Because of market distortions created by renewable subsidies, when Texas ran low on electricity Monday night, the grid operator had nowhere to turn.

... For years it has been obvious to everyone that renewables have been worsening the stability of the Texas grid.

Fortunately, there is a simple path to reform.

First, the Texas Legislature must this session eliminate all subsidies and benefits for renewables in Texas.

These include the state’s renewable energy credit program, property tax abatements under Chapters 312 and 313 of the Texas Tax Code, and subsidized transmission across hundreds of miles of Texas ... "

Posted by The Cliff Claven of Finance at 12:47 PM